Gordon and Paula spend the night on Amsterdam’s beautiful canals based on two music posters they saw on the internet. Read here about their stay in a unique bohemian shabby chic houseboat.

In deciding where to stay in Amsterdam (the Netherlands), our decision was informed by two things. One, we wanted to stay in the one place for the time we were there that was what we considered to be representative of the city. Two, I had a broken leg and would not be as mobile as I normally am and therefore anything with stairs or was not in a very convenient position, was out of the question.

We searched for places that met our needs, and then came across the houseboats of Amsterdam. We faced our next dilemma, where in Amsterdam was an ideal place out of so many ideal places. We rang my brother who travels to Amsterdam on business regularly and who was actually there at the time.

He suggested that he thought that the Jordaan area would be a good choice for two reasons. One it was a central location and two, it had a very bohemian feel that he felt suited our personalities and travelling style.

So we had the area sorted. Then we faced our next dilemma, which canal. This was where we just thought that serendipity will hit and we will know out of all of the ones we were looking at, which one would work for us. You know what, it came down to two posters on a wall in the photo on the Internet. Yes, that is how to pick a location to sleep less and to dream more.

“Yes, that is how to pick a location to sleep less and to dream more.”

The decider was a poster of The Who concert and The Jam concert. We looked at one another and thought that this person has taste and style.

This is how we came to our very own bohemian shabby chic houseboat on the Prinsengracht canal in the Jordaan area of the stunning city of Amsterdam.

The houseboat in Amsterdam was even more than what we expected as our own ducks greeted us each day, and yes we became very proprietorial about our boat. Passing boats spent there time photographing us as they thought we were locals as we had the Dutch flag flying from our boat.

The Jordaan area though we didn’t confine ourselves to just this district was amazingly easy going with lots of cafes and very good food. The markets that were just aroung the corner on Saturday gave us a good feel of how the local people live. One thing that we didn’t factor into our consideration was that Amsterdam is full of steps and cobblestones. Any bathroom was up steep steps, and I was precariously clutching at Gordon while trying to keep my crutches from catching on the cobble stoned streets. It hurt very badly walking around, but .. it was probably the best physiotherapy that I could have ever had as my leg got better and better the more the trip went on. I also met some of the kindest people willing to move tables to make getting into a place easier.

When we weren’t out exploring, we were sitting watching life on and off the canal. Day or night we were totally in love with our houseboat, our canal, our Jordaan and this stunning city that I fell totally in love with. Did we sleep less, and dream more? Most definitely, we dream of returning to our shabby chic houseboat and to Amsterdam.

“Did we sleep less, and dream more – most definitely, we dream of returning to our shabby chic houseboat and to Amsterdam.” 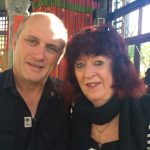 At Contented Traveller we like to market destinations and experiences. We like houseboats, tatami mats, cave houses, over water bungalows and travelling our way. We are Paula and Gordon, a couple who believe that travel is all about serendipity. Find us at the Contented Traveller and on Facebook.

Recommended further reading
Visit Giethoorn (from Amsterdam), the most beautiful village in the world
Coolest hostel in The Hague: The Kingkool Hostel
The best multiple day music festivals 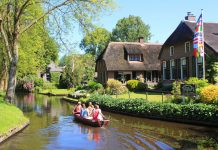 Visit Giethoorn, the picturesque Dutch village with no roads 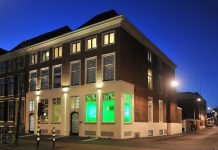 Good vibes at the Kingkool hostel in The Hague! 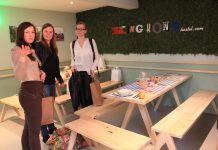 New monkey in town: The King Kong Hostel in Rotterdam