Home Travel the world Africa How to prepare for your Danakil Depression tour in Ethiopia? 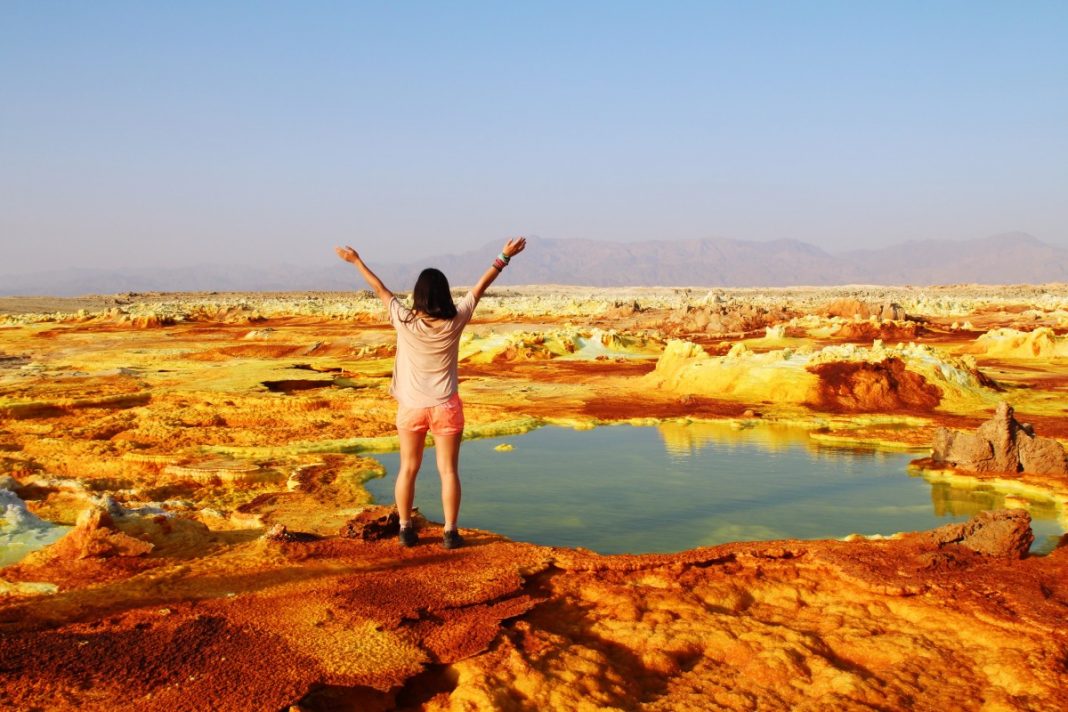 “Welcome to Danakil Depression, the most inhospitable place in the world.”  With these joyful words Guide Fish started our Danakil Depression adventure in Ethiopia. I spent four days traveling in this otherwordly region located <100 meter below sea level close to the borders of Eritrea and Djibouti. We drove our four-wheel drive on the worst roads, explored crazy yellow-orange landscapes and sulphur springs, saw the camel caravans of Afar people on seemingly endless salt flats, watched the sunset over the lakes, floated in the salty water and slept under a million stars… it was an absolute adventure!

But, the best moment of this little expedition was climbing an active volcano in the dark to witness one of the world’s few permanent lava lakes. The volcano put up a good show of light and fire and we saw several eruptions. That night, we slept at the rim of the volcano. It was one of my most special travel experiences ever.

Here is a Q & A to prepare for your own visit to Danakil Depression!

What is the Danakil Depression?

The Danakil Depression is located in the Afar region in northeastern Ethiopia, close to the border of Eritrea and Djibouti. It’s considered one of the hottest (average 34,4 C), driest (100-200 mm rainfall/year) and lowest regions on earth (125 meter below sea level). It is also one of the most geologically active regions with three tectonic plates meeting at the Afar Triple Junction. When tectonic plates move apart like at Danakil, it creates lave lakes, hot springs, geysers and fissures in the ground.

What is the general itinerary of a 4-day Danakil Depression tour?

During our tour I noted down our exact itinerary.

Where and when should I book the Danakil Depression tour?

I would advice to book your Danakil Depression tour once you’re inside Ethiopia (and preferably from Mekele). There are several tour operators:

I ended up booking ETT. I arrived around 6PM at their office, booked my trip and left the following day. Although I enjoyed my trip with ETT, our group was fairly large. It was a mix of young and old, backpackers and other types of travelers. If you’re looking for a more private experience, it’s better to book with another company. Make sure to double check whether you will truly get a private tour. I heard that some tour operators combine travelers who booked ‘private tours’. So this means you pay more and you’re still traveling in a large colonne.

I also heard that some other companies provide gas maskers. ETT did not provide any gas masker, even though we slept on the rim of the volcano inhaling a lot of toxic fumes. If you would like a masker, make sure to ask whether this is included. As a medical doctor, who is currently working at the Dept. of Pulmonology, I’m a bit worried about all those crazy smelling, intense fumes I inhaled ;)

How many days should I pick for the Danakil tour?

What is the best time to visit Danakil Depression?

From November to June is the best time to visit.

What are the costs of a Danakil Depression tour?

People paid between 250 – 600 USD depending on what’s included (e.g. transportation from/to Mekele) and how many days. I ended up paying 300 USD for a four-day tour including ‘free’ transportation by Landcruiser from Lalibela to Mekele and transportation from Mekele to Aksum, but gas masks were not provided. People who booked from Addis Abeba or from outside Ethiopia paid most. Overall, I felt it was a fair price.

Make sure to bring some change to tip the local guards!

How are the facilities during the Danakil tour?

In general: basic. Most likely your will spent four days and three nights without a shower (maybe a cold bucket shower), toilets and electricity. You will sleep on wooden woven beds in the open air or on the ground. The food during the tour was simple, but tasty. The cars are generally in good condition. The roads were extremely rough. Our car broke down and we had to wait for a replacement. In short: nothing a backpacker can’t handle ;)

Do I need to be fit to visit Danakil?

I think a basic level of fitness is required to climb Erte-Ala vulcano. Overall, it’s the harsh and rough circumstances that make this trip challenging.

“The Afar walked noiselessly in plastic sandals and rubber flip-flops. Their bodies carried no fat. Their rifles were extensions of their arms, rarely set down and never out of their reach. Every noise and peripheral movement brought a reaction that only those who live in a war zone can give. Some had grenades hung from their belts that if exploded near the hardened magma would intensify the shrapnel a hundred-fold. All of them kept a dagger in their belt. Up close, their faces were a mass of scars and more than a few had a milky eye from blowing sand. They were warriors first and foremost, and they were always at war.” -James Michael Dorsey, Nowhere Mag.

Is the Danakil Depression safe to visit?

Whether or not you find Danakil Depression safe to visit is up to you! These are the facts:

What do I need to bring on my Danakil Depression tour?

What to wear on my Danakil Depression tour?

Remember, Danakil is called the hottest place on earth for a reason. It was indeed very hot at the salt flats and sulphur springs, so I was wearing shorts (or a legging) and a shirt. During the Erte Ale climb, I was wearing a legging, shirt and my Northface jacket.

How to get to Mekele?

Is it ethical to visit Danakil Depression?

The remote Danakil Depression can only be visited with an armed escort, since there have been a few kidnappings and murders of tourists in the last years. In December 2017 (only weeks before my own visit), a German tourist was killed.

Is it ethical to visit a region you’re clearly not welcome?
Or is it ‘plain terrorism’ and should we therefore ignore this?
Is it ethical to endanger the lives of these guards, so tourists can visit?
Or is the money coming from tourism in this extreme poor and desolate region with harsh living conditions a good thing?

I don’t have the correct answers, but these are some things to consider. I can tell you that it felt a bit odd to drive in expensive four-wheel drives with DSLR’s around our necks, passing by people wearing plastic water shoes and holes in their t-shirt, working in extreme harsh conditions.

Let me know what you think!

Have you ever visited a region like this? Or an active volcano? 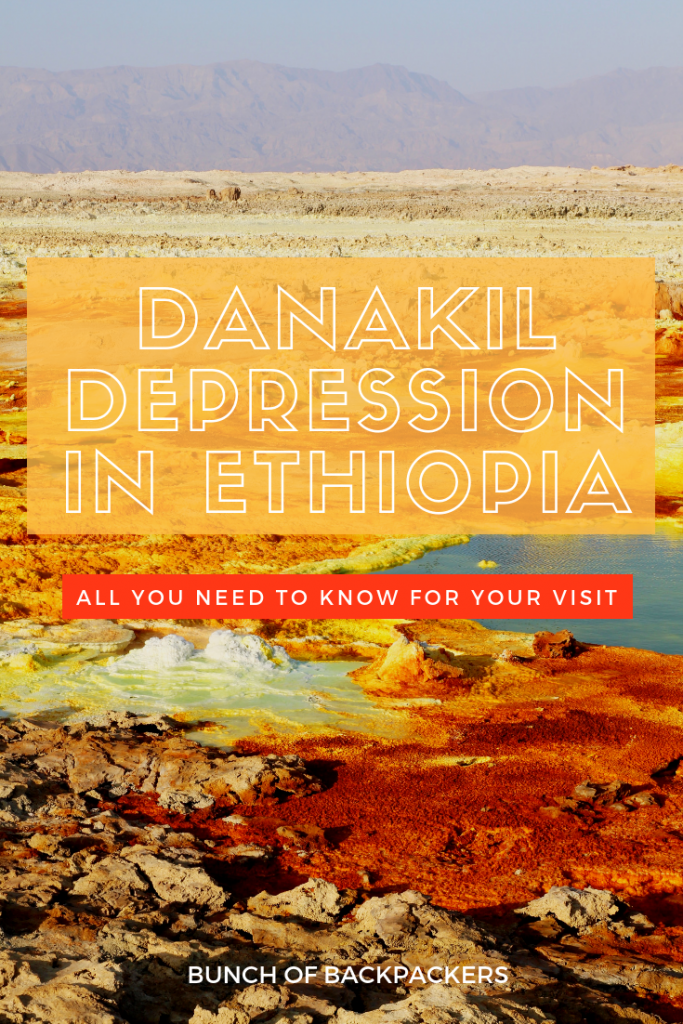 You may also like:
Ultimate Guide to Backpacking Ethiopia
How much does it cost to backpack Ethiopia?