We had just weighed anchor a few hours earlier in Miami Beach and 3,000 miles of Atlantic Ocean was all that lay ahead between us and our next landfall. Excitement was running through our veins. This was by far the longest passage we’ve ever completed. Those 380 miles we sailed from Grand Cayman to the Bay Islands of Honduras felt like child’s play compared to what we were in for.

Written by Jessica of MJ Sailing.

Normally seasick and immobile on passages, fate seemed to be smiling on us, giving us flat seas to ride through, even if there were clouds and rain surrounding us. Rain we can handle; big seas, not quite as much. My only other kryptonite on passages are the beginning of our four-hours-on/four-hours-off sleep shifts. They can take days to adjust to and usually just as we start to get acclimatized, we’ve arrived to our destination.

I had barely been in bed for 90 minutes when a terrible racket began pounding outside. I had grown accustomed to these noises before, Matt adjusting the sails while I slept, but this sounded much worse, as if something was seriously wrong.

Normally we sail in winds anywhere from 15-30 knots, and when I had gone to bed they were lower than normal, hovering just below 10. The scene as I bounded into the cockpit through was something out of a sailor’s nightmare. I glanced at our chart plotter in time to see the winds gust up to 60 knots, and the rail of our boat was in the water due to the force

Without even having time to call for help since this came up on us within seconds, Matt was trying to handle the situation by getting our headsail rolled back in before the substantial stress could tear it in half. With an extra set of hands on deck there was still little he could do with them, since they were attached to my noodle arms. There was just no way to slowly or properly release the tension on the sheets (the ropes attached to the sails) to get the sail rolled back in.

Noticing it was beginning to tear at the ends he did the only thing he could think of in that split second and released the sheet completely from the winch, allowing the sail to flap wildly in the wind. Even though this was not at all good for the sail or the sheets it was attached to, this option was the lesser of two evils and much better for our safety. Without the strain on the sail we were able to right the boat again so we were level.

At first we thought what came up on us might be a sudden squall, passing just as quickly as it had come. The winds were beginning to subside from their 60 knot status, but they had no intention of going away completely. Still holding strong in the mid 40’s, we weighed our options. The storm that had come out of nowhere was bringing winds from the exact direction we were trying to head…north. In all other scenarios the safest thing to do is put your back to it. In this case that would mean pointing our bow south. Directly into the opposing current of the Gulf Stream.

If there’s one thing you learn as a sailor treading waters anywhere near the Gulf Stream, is that you never attempt to cross it where there is any hint of a north winds because the rival wind and current can create very steep and confused seas. Yet here we were, smack in the middle of it, with nowhere to hide. South it had to be.

Even though I’m mad at fate for sending this incredibly horrendous storm our way on the first night of a 30 day passage, I do have to be thankful for the flat seas we started with. While riding out the remaining two hours of the storm the seas never had time to build up to more than 5-6 feet, and with our back to them, we were completely safe. 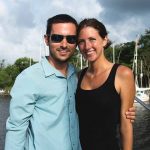 Jessica is one half of the crew of s/v Serendipity, the J to MJ Sailing. Jessica and her husband Matt have taken off to see the world on their 34 sailboat, having left from Lake Michigan in 2012. In the last two years they’ve covered parts of the Caribbean and Central America. The most recent leg of their journey has brought them across the Atlantic where Europe and the Mediterranean awaits. Follow their adventures on Facebook. 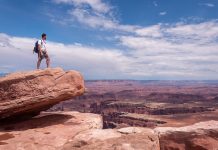 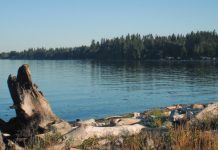 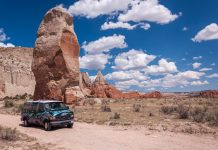 Money matters: How much will your USA road trip cost?