Home Travel the world Europe Sleep less, dream more – Sleeping under the wings of the active... 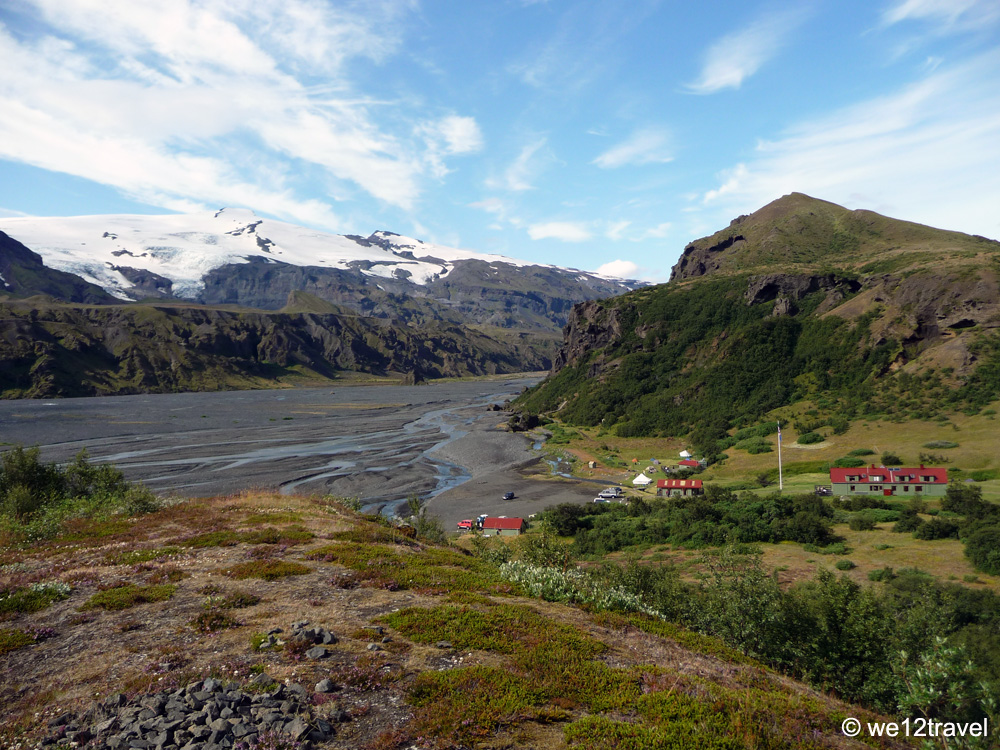 Iceland is the land of trolls, elves and other hidden creatures. But it’s also the land of ice and fire. Who hasn’t heard of the Eyjafjallajökull eruption that caused all European air traffic to shut down in 2010, leaving people stuck all around the globe for days…Well, that same Eyjafjallajökull makes up for an interesting night!

The volcano lies close to the Icelandic south coast and can easily be seen from the lush Þórsmörk (Thórsmörk) valley. This valley is a We12travel favorite spot for camping and hiking. It is surrounded by glaciers and next to the thundering Krossá River that can only be crossed by 4×4 jeeps. In 2009, we had our first camping experience in the valley and immediately fell in love with the place. It’s peaceful, quiet and simply stunning.

Then in 2010 the (in) famous eruption came. Þórsmörk was covered in a layer of ashes and the glaciers turned black. We got to witness that when back in Iceland that same summer and as well in 2011. Man, what a change of view… all because of a volcano eruption.

Upon arrival in Þórsmörk in 2011 we decided to camp at exactly the same spot as in 2009, right under the wings of Eyjafjallajökull that heavily erupted the previous year. While in our tent I felt incredibly restless that night. It was not anxiety because after all, how often does it happen that volcanoes erupt two years in a row? It wasn’t anger either, because how could I be angry with Mother Nature for blackening this pristine piece of wilderness? It was probably a gut feeling that something was about to happen that next day.

We did a three day trek into Þórsmörk (called the famous Laugavegur trek) and had planned to hike out again the next day. By doing so, we would first have to cross the dangerous Krossá River on foot. The footbridge that we had taken the years before had been washed away and hikers had to conquer the river with their own strength. Although we did plenty of other river crossings during the previous days, this one neatly swept me off my feet and the results of that would have been disastrous. During my restless night, it had been raining and the river actually was way too high to be crossed by foot. I lost my wading shoes during the crossing and my hiking companion literally had to drag me out of the water onto the banks of the river.

The hike we planned on taking, would have led us over the Fimmfördurhals mountain pass, the one that separates Eyjafjallajökull from the notorious Katla volcano. After being pulled back on the shore of the river, I got a panic attack and even though we attempted to continue the hike, I just couldn’t do it. Something inside me told me that I should not continue. Eyjafjallajökull did not want me to enter its grounds. Or was it the trolls that made that decision for me?

Never did I feel any regret for not pushing on to Fimmfördurhals that day. The weather was horrible and the conditions just weren’t good. One day I’ll be back and I will conquer it. No matter what.

Antonette is the female half of we12travel, an outdoor adventure blog. She loves to go on trekkings all over the world and enjoys camping in nature. When home, she’s an office worker and travel writer for her own blog and other sites such as Reisbijbel.nl and Verkeersbureaus.info. And yes, she actually knows how to pronounce Eyjafjallajökull…