In mid-2013, while travelling through Guatemala, I met a fellow Aussie gal, who in turn met an American beau. We all became travel buddies, and continued our trip through Guatemala, then up into Belize. The American beau was keen to visit what he described as a gorgeous, secluded, palm-tree covered, white sand island, just off the Belize Barrier Reef (the second biggest in the world) – “why not?” we thought. After some fairly remote travelling on rough roads through Guatemalan jungles, this sounded heavenly. As none of us really had any concrete travel plans, we booked 2 over-the-water bungalows in paradise – what could possibly go wrong?

Written by Penny – The Travelling Penster

The first red flag showed itself when the other Aussie and I read the traveller reviews on TripAdvisor. Now, I’m normally not one to take much note of TripAdvisor reviews. If I do read them, I generally read the worst review, decide whether I can handle what they’re complaining about, and if all else looks good, stay there. BUT, the number, length, and content of the bad reviews for these ‘resort’ bungalows was something we just couldn’t ignore. They mentioned disorganization, facilities being well below par for a resort, and a drunk owner who constantly abuses guests for no reason. Despite our new found hesitations, our senses of adventure took over, and rather than cancel the reservations and travel onwards, we were island bound.

Fast forward a few days, and we boarded a boat headed for the atoll. But no sooner had we boarded, that we realized the reviews might all be right: the owner (and boat driver) was completely out of it! The only comforting thought running through my head was that she had likely completed this journey 1000s of times (having lived on the island for most of her life).

Despite the owner existing on another plain to the rest of us, the boat trip was fairly non-eventful (except the owner ordering her teenage daughter around). As we got closer to the island, most of the worries we had were (at least temporarily) forgotten. In the distance we could see our over-the-water bungalows suspended above the stunning, clear, crystal blue water (just like something out of a glossy travel magazine!). We unloaded the boat and made our way to the highly anticipated bungalows. As many of the reviews had pointed out, they were indeed very rustic (like much of the island), and certainly not what you would call ‘resort standards’. But they were spacious, the beds were comfortable, and we had everything we needed to cook the week’s meals on the gas stove.

Over the next week we had a blast! By day, I scuba dived the reef, with stunning coral, sharks, fish, stingrays, and turtles. By night, we cooked, drank, chatted, and played cards. The stars were absolutely outstanding; close to the most I’ve ever seen in the night sky. I had some of the best sleeps I’d had in a while, listening to the ocean, and nothing else. The whole week the weather was perfect, until one night a terrible storm started rolling in across the sea. The lightning in the distance was spectacular, that was until it hit our little island …

The wind was howling through the bungalow’s many cracks, and the entire structure shook. At one point, one of the doors slammed open, nearly giving me a heart attack! My heart was pounding as I jumped out of bed, and wrestled with the wind to try and wedge the door shut again. Having successfully jammed the door back into place, I got back into bed and pictured one of the bungalows further along the island – or rather the remnants of one. It had been completely blown away in previous storm. But I reassured myself that my bungalow was firmly planted in the sea floor, and it must have been a much larger storm than this (as I imagined me in my bungalow being swept out to sea).

Being a seasoned solo traveller, I don’t tend to get scared sleeping alone in strange places, but that night I’d be lying if I said I wasn’t a little scared. Thankfully the storm passed without major incident (except my near heart failure). I found out the next morning that one of my travel buddies did not fare as well, and had to self-medicate in order to get back to sleep.

All in all, the trip was one of many fabulous adventures I’ve had travelling; something I’ll cherish, and never forget. The owner didn’t verbally abuse any guests the whole time (secretly this disappointed us), and we were sad to leave, but it was on to our next adventure. 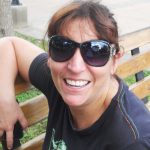 Penny is an avid Australian traveller, who is 1.5 years into a 2 year trip abroad.  She’s currently living in Panama, and has so far visited 20 countries across 4 continents.  Penny is the creator and author of the Travelling Penster, which features humorous stories, useful tips, and stunning pics from her adventures across the globe.  Check out her website and follow her on Facebook to find out more.